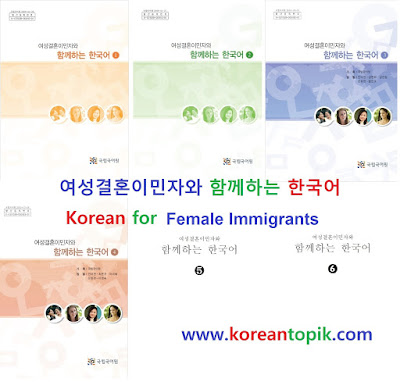 Korean for female immigrants (in Korean: 여성결혼이민자와 함께하는 한국어) is a Korean language book series specially designed for female marriage immigrants. The book aims to help Korean marriage immigrants learn Korean language and culture, adapt to daily life and social life in Korea, and communicate smoothly with members of Korean society. As a result, the textbook is divided into 2 sections: "Language education" and "Culture education".

In the 'Language' section, the content is composed of topics, situations, and functions frequently encountered by female immigrants. It is designed to systematically present language elements such as grammar and vocabulary, and to provide balanced pronunciation of spoken and written language. Particularly, female immigrants have increased the amount of vocabulary learning in consideration of the fact that unlike most Korean learners, they learn Korean as a second language.

In the 'Culture' section, cultural education contents are suggested as priority contents for adaptation to Korean life, but considering that it is more effective to arrange in relation to language education. In addition, the learners not only understand Korean culture, but also comprehend the difference between Korean culture and their own culture based on the principle of cultural relativism.

The book series has a total of 6 volumes, divided by the difficulty level: Book 1 and 2 for beginners, book 3 and 4 for intermediate learners, and book 5 and 6 for advance learners.

You can get a textbook copy at: Korean for female immigrants 1-6 PDF +Audio