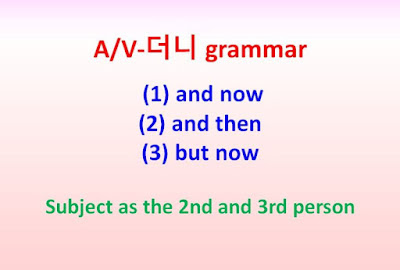 Usage:
- State a reason for changes that was directly witnessed in the past = and as a result / and now…(example 1-6)
- Recall an action witnessed in the past and its following action  = and then… ( example 7)
- Indicate a contrast in the past and the current state of affairs = but now…( example 8, 9)
- Can only be used for subject as the 2nd or 3rd person. However if the speaker refers himself or herself in an objective manner, the 1st person can be used as subject. (example 10,11)

1. A/V-더니 grammar
- 2nd and 3rd person subject (1st person subject is possible when reflecting on oneself in an objective manner)
- The subjects of both clauses must be the same
- Can be used for Verb and Adjective
- Meaning:
+ result of a past occurrence
+ contrast between past and present
+ recall an action witnessed in the past and its following action

2. V-았/었더니 grammar
- 1st person subject (3rd person is possible when quoting someone else’s action or behavior)
- The subject of 2 clauses can be different
- Can be used for Verb only.


- Meaning:
+ result of a past occurrence
+ express speaker’s discovery after doing something
+ recall a reaction or behavior of someone to the action or behavior in the preceding clause
+ connect quotes with action